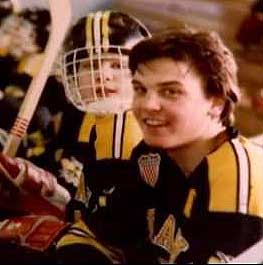 Richie Stewart as seen in his hockey playing days at Upland Country Day School. Stewart worked for Cantor Fitzgerald and died in the 9/11 attacks on the world Trade Center. His story was the subject of a documentary on Comcast SportsNet which won an Edward R. Murrow award.

EAST MARLBOROUGH – As the anniversary of the September 11, 2001 terrorist attacks on the U.S. approaches, a video documentary of a Unionville-area native who died that day has been honored with a National Edward R. Murrow Award.

Teammates, teachers and coaches at Upland, featured in the video piece, including current ninth grade teacher Court Dunn, talk about Stewart’s positive attitude, strong character and his consistent reliability in scoring goals, seemingly at will.

A leader on the ice at Upland, Stewart set the single season scoring record with 42 goals before heading to the Lawrence School in New Jersey. At Lawrence, he became captain of the hockey team in his junior and senior years and went on to be inducted into the school’s Hall of Fame. The video depicts Stewart as more than just a standout hockey player though; he was the consummate teammate – always there to lend a hand, compassionate to others, and all about family.

When Stewart’s playing days were over, the former class president and scholar athlete headed to New York City to work for the firm of Cantor Fitzgerald in the World Trade Center. Though his weeks were busy, on Friday nights he would lend a helping hand to feed the homeless at a church on the Upper East Side. His office was on the 104th floor of the World Trade Center, in the first of the towers to be hit by a terrorist-hijacked airplane on Sept. 11, 2001.

Stewart’s father recalled his last conversation with his son. Stewart’s office was filling with smoke and he was about to evacuate. He expressed his love for his father and told him to express the same message to his mother. He also said he was all right and would call as soon as he was safe, but that call never came.

The “Remembering Richie” mini-documentary originally aired in a special edition of Comcast SportsNet’s Impact Philly program. The monthly magazine show was dedicated to telling the stories of the impact of the September 11th attacks on families and friends years later. The story of Remembering Richie stood out from the others and was honored with the prestigious National Edward R. Murrow Award for video sports reporting.   The video is currently available at http://www.youtube.com/watch?v=FSewQk-zALU.

“Richie was a young man that could do amazing things when he put on his skates but he will be forever remembered for his love of family and friends that surrounded him when he left the ice,” the video’s introduction begins. “Richie Stewart was a standout star at Upland Country Day School and later went on to share his philanthropic work ethic in New York City. He was living the beautiful life, making a difference in the lives of others. Then came September 11, 2001 and he was gone.”

“I was honored to be able to tell Richie Stewart’s story,” said Comcast SportsNet Senior Executive Producer of Special Projects Brad Nau. “His friends and his family continue to reach out to make sure that his memory lives forever. I know that Richie Stewart has touched many lives…including my own. I will never forget his story.”

Stewart attended Upland Country Day School from 1970 to 1982. At 16, he had set the single season scoring record for goals, a record that lasted 13 years. He was president of the student body and voted Best Student, Best Athlete and Most Likely to Succeed. A plaque commissioned in honor of Richie Stewart currently hangs outside the boys’ ice hockey locker room at the school ice rink. It is a tradition for Upland players to rub the plaque for good luck before each home ice hockey game.

The Radio Television Digital News Association has been honoring outstanding achievements in electronic journalism with the Edward R. Murrow Awards since 1971. Murrow Award recipients demonstrate the spirit of excellence that Edward R. Murrow made a standard for the broadcast news profession.