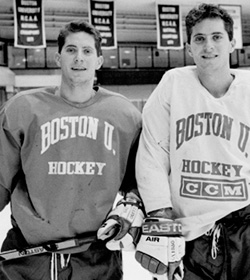 Like the rest of the world, the hockey community — and college hockey — was not immune to the consequences of the September 11, 2001 terrorist attacks on the United States.

Most specifically, one of the planes that hit the World Trade Center that otherwise beautiful late summer morning, was carrying Mark Bavis and Ace Bailey, scouts for the Los Angeles Kings at the time. Bavis was a standout at Boston University, along with his twin brother Mike, who is still an assistant coach at BU.

Mike Bavis still struggles to overcome the loss of his twin, and he channels that energy towards fighting for victims’ rights. Of all the victims’ families, most took part in receiving a piece of a $7 billion fund set up to assist. Ninety-four others, including Bavis, sued instead. Bavis and his family are the only ones still involved in the suit.

“I don’t think there’s any question the whole family feels that way,” BU coach Jack Parker told BU Today. “You pick on one of us, you’re going to fight all of us.”

Andy Murray, recently named Western Michigan’s new coach, played a tangential role in this. He was head coach of the Kings at the time, and Bailey and Bavis were heading to L.A. for a meeting. Current Washington Capitals coach Bruce Boudreau was a coach for the AHL’s Manchester Monarchs, also needing to get to L.A., but his flight was changed to Sept. 10 when Murray called a for a coaches dinner. Bailey and Bavis waited until the next day.

Meanwhile, among the dozens of other former NCAA student-athletes killed on that day (Boston University alone lost 27 alumni overall, former athlete and not) were St. Lawrence graduates Mike Pelletier and Richie Stewart. Both were members of the 1988 Saints team that made the national championship game. Both worked in the World Trade Center for Cantor Fitzgerald, the trading firm that lost a large portion of its staff that day.

The losses still resonate through the hockey world, as they do for all Americans.

It might be hard to remember how on edge everyone was at the time. Sports took a week off. Stadiums and arenas were re-opened only under heavy protection. You couldn’t get in without being thoroughly searched.

The college hockey season would open just two weeks later. The players on those teams were — as they always are — just students, only one month into the school year.

Of course, in the hockey world, everyone knows everyone with very few degrees of separation. This hit home again, recently, when a plane crash in Russia took the lives of the entire Lokomotiv Yaroslavl team except one, a team filled with International stars and many former NHL players.

The tentacles of reflection thus touch everyone, still.

“I think about them, I think about that team, not every day but at certain times,” former St. Lawrence roommate and NHL player Jamie Baker told the Toronto Star.

That support helps get Mike Bavis through.

“We’re really lucky in hockey that we have so many genuine, real people who care,” Bavis told BU Today. “Because of how close those relationships are, they also continue to support my family.”

Today, The Mark Bavis Leadership Foundation awards scholarships of $3,500 to $5,000 to Massachusetts high school students who “have made a difference in their communities or demonstrated leadership at their schools.”

“Another anniversary. It’s the 10th one,” Mary Bavis told BU Today. “Every year, it’s always difficult. … I look at Michael and think, ‘Mark would probably look exactly like that now.'”